EnChroma® Colorado is our alpine-inspired frame engineered to deliver clear, bright color and 100% UV protection for those with mild, moderate and strong Deutan color blindness. With a style worthy of every one of the 55 mountain peaks in the state of its namesake, Colorado is ideal for those who live the sporting life. Features a sleek stainless steel metal frame and generous lens shape wrapped just enough to provide ample protection from UV rays and the elements. Shiny gunmetal color with matte black sculpted, adjustable (TPA) temples and silicone nose pads gives the Colorado universal fit appeal. Pleasing brow curve with angular corners projects a strong look. Each temple tapers at its center for lightness and flairs at the temple end to ensure a secure and comfortable fit. Case included. Frame size: 61-16-135.
What's Inside 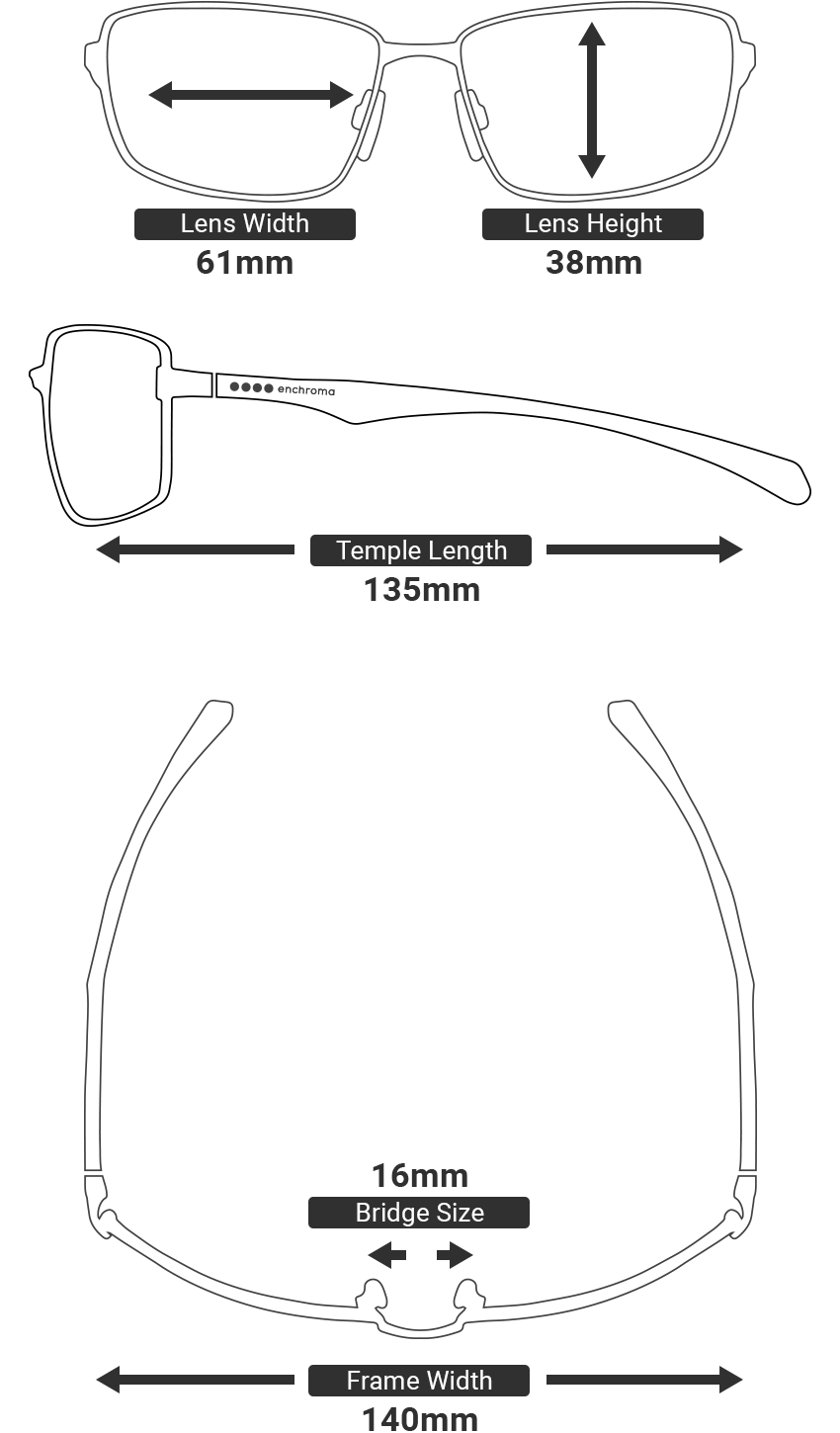 Thin and stylish frame yet not as fragile as it looks. Helps with everyday tasks and never loved a purchase more!

Experiencing how others see was a great experience, and I look forward to my walk where I wear the glasses!

M
Melinda B. (White Plains, US)
Amazing to see colors the way they were meant to be

I never knew how limited the colors I was actually seeing were. These glasses are amazing.

H
Hannah B. (Rock Island, US)
Soooo glad I bought for my husband

So…my husband has strong protan color blindness. We’ve been married for 4 years and I’ve never seen him look outside at the trees like he did when he put these on Christmas morning. All I have to say is WOW! The first words out of his mouth were, “…..This is what YOU GUYS SEE?” He kept saying it over and over in astonishment. My husband is not one to feign excitement and is not a very talkative guy…but he could not get over these glasses. He teared up too. Big burly mountain man of mine… I wish I had gotten him these sooner. It broke my heart to realize what he has been missing all his life but also warmed my heart SOOOO much to be able to give that thing he was missing to him. Besides just for fun, he is going to use these in his contracting job to help him match colors for customers better! What a joy and a blessing these are! We decided this must be what heaven will be like- when we open our eyes for the first time to the beauty God has created for us there!

A
A.A. (Greeley, US)
The best gift I've ever received

My wife gave me the enchroma Colorado Cx3 Sun outdoor glasses as a birthday gift, and they are, without a doubt, the most emotional gift I've ever received. I have a pretty strong red-green color deficiency, inherited from my mom. I never realized how much it affected me until after I got married, and my wife noticed little things I didn't know. For instance, I never knew the "green" traffic lights were truly green; I thought they were basically white. In fact, when my wife found out I thought they were the same color as the crosswalk "walk" indicators, she was stunned. Over the years, I realized that for her and my kids, pink isn't "almost gray," and orange juice actually is orange. I found out that beautiful white-and-blue sunsets are orange, pink, and purple. But I never thought I'd be able to see those things for myself.

Earlier this year, I started wondering: What if my wife's beautiful eyes are even more striking than I realize? What if I've never truly seen my kids' hair and eye color? And now I've had a glimpse: The beauty in the world is more beautiful than I knew.

We were working out in the yard when my wife and kids gave me the glasses. I put them on, and immediately was stunned. Even the blue sky is more blue than I thought. The reds in the fall leaves have so much more variety than I knew, even when they've fallen. But to see the red highlights in my kids' hair, and the green in my wife's and my youngest daughter's eyes, brought tears to my eyes. Many times over that first weekend, I wept. The sunsets are amazing in Colorado, but they're even more amazing than I realized.

I'm in awe. I was afraid the glasses wouldn't work for me, or that it would only make a very slight difference. I was praying that I would be one of the people who benefited from the glasses, but I didn't really think I would. It was even better than I dared hope. Thank you, enchroma, for developing this tech. It's a blessing from God, and I'll never forget it.